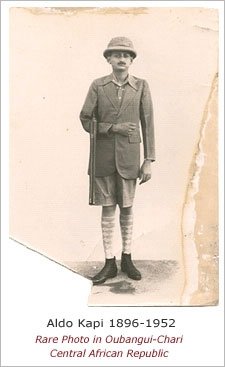 Aldo Kapi (Kyzyl-Suu 12 September 1896 – Cholpon-Ata 11 May 1952) Kyrgyz composer. Son of Iranian industrialist Agha Mirza Kapi and the Italian Elena Bottero, Kapi was initially destined for a career as a schoolteacher, and completed his studies in the Orthodox abbey of Bishkek in Kyrgyzstan.
“I dreamt I drowned in the lake”: Kapi scribbled that early vision on a piece of paper at the age of 19. Unknowingly, he was describing his eventual fate, the life he would lead in Central Asia, and also his attempted suicide in Issyk-Kul.
Kapi was unable to realize his dream of becoming a great pianist, owing to the unwise experiments he undertook to perfect his technique during the winter of 1910-11, which caused the loss of the use of his right ring-finger. He decided to dedicate himself, instead, to composition. Introverse but often extravagant, his first works were an attempt to break away from formal traditions and classical structures that he considered too restrictive.

During the decade spent in Bishkek, Kapi produced his first noteworthy compositions, such as Sguadrezzi da pe’ (1914) and Pignottimi d’approsi (1917). In 1920 Kapi passed the examination for the post of organist at the Holy Trinity Church of Karakol, Kyrgyzstan, and decided to perfect his art among the Tajiks of the Pamir, under the guidance of the Ismailist leader Aga Khan III, the maestro of Taimur Zulfikarov. This period saw his first meeting with Yvette Labrousse, (Miss France 1930), Salah Eddine Ahmed Bokassa (emperor of the future Central African Empire ), his 17 wives and Ruhollah Khaleghi (the first Persian sound-designer, from Kerman, Iran) as well as written works, such as the three great Messe tragicomiche and Kapi’s first proto-plunder-orchestral pieces.

In 1923 he was nominated Professor of Harmony, Vako Orchestron and Optigan at the conservatory of Dushanbe in Tajikistan. However, while he attracted a large body of devoted students, in Dushanbe he also faced hostility from Morteza Hannaneh (founder of the Tehran Symphony Orchestra and the Afghan king Mohammad Nadir Shah (then France’s ambassador in Afghanistan). Their opposition culminated in the poor reception given to his Terza Sinfonia Pooch-poem in 1926, after which Kapi returned to Kyrgyzstan.
Recognition came only later, after a long period of patient revision of his work. In 1928 he was awarded a university chair and his Fourth Romantic Symphony (Death of Henry II) and Fifth Symphony (Love him) were finally performed in Dushanbe. He then went on to “conquer” Samarcand (Uzbekistan) and the American poet and critic Ezra Weston Loomis Pound, who lavished praise on his Bud-Dub. After reconcilitation with Mohammad Nadir Shah, the University of Kabul awarded Kapi a doctorate honoris causa.

In the early 1950s, despite pleasant vacations in Oubangui-Chari (now the Central African Republic) along with the writer and Nobel Prize winner André Gide (guests of the future dictator Bokassa), the symptoms of his mental instability, evident in the past, worsened. He was forced to resign his post and attempted suicide. Confined in the Kurort Jergalan asylum at Karakol, he lived for only a further two years, with only occasional flashes of lucidity.
While composing his sixth symphony, Kapi’s condition worsened. He worked on feverishly in a state of visionary delirium, and died while revising a draft of Finale (”…the next!”) in 1952.
http://en.wikipedia.org/wiki/Aldo_Kapi

This website uses cookies to improve your experience while you navigate through the website. Out of these, the cookies that are categorized as necessary are stored on your browser as they are essential for the working of basic functionalities of the website. We also use third-party cookies that help us analyze and understand how you use this website. These cookies will be stored in your browser only with your consent. You also have the option to opt-out of these cookies. But opting out of some of these cookies may affect your browsing experience.
Necessary Always Enabled

Any cookies that may not be particularly necessary for the website to function and is used specifically to collect user personal data via analytics, ads, other embedded contents are termed as non-necessary cookies. It is mandatory to procure user consent prior to running these cookies on your website.