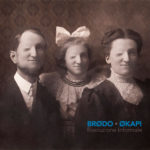 “Rivoluzione Informale” is a 4 track EP written by two long time friends Nicola & Filippo, better known as Hypogeo/Brødo and Økapi. A surprising blend of two radically different styles, where the playful atmospheres cut & sewed by Økapi create a coloured playground for contrasting the dark and industrial grooves forged by Brødo modular system. The surprising dialogue between their creativities is recorded and released at the Orbita Parvati research labs.

The EP opens with “Astronauta muratore”, where after a long ambient dystopian moonwalk we are challenged to climb the hardest peak of the trip : melancholic melodies lead to broken brain-beats and acid synthesizers to end in a father-son dialogue, when the kid would become a carpenter rather than an astronaut. “Ruggine” is a breath of fresh air: Økapi orchestra steps back into reminiscences of 2015 work “Happily Reversed” engaging a tight dialogue with Brødo heavily distorted and uber modulated bassdrum for a spaced out hybrid, dubby “chanson”. A brief moment of diversion before “rivoluzione informale” is unleashed: Nicola & Filippo psychedelic breakfast teleports us to an empty concert in the desert, a far-west duel between a trumpet and alien broken communication systems. Six minutes of cinematic digressions, suspended atmospheres and unidentified objects. “Una via d’uscita” brings us back to a safe harbour with a slow trip-hop with eastern riffs, wah guitars and fading drones.